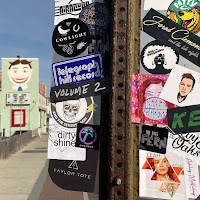 In what I hope becomes an annual tradition, Telegraph Records releases a compilation of new music from its current and prospective artists, and I write a track-by-track review. The rules are simple: I listen to the song once, come up with a couple things to say, and wrap it up by the time the song is over. No pauses or repeats. I cheated a little bit. But with a collection this good, it's hard not to want to press "repeat."

Levy & the Oaks , "You'll Fly" -- What a way to kick things off! Levy & the Oaks continue their run with this harmony-soaked ode to self-preservation. Pitch-perfect vocals hover above white-hot guitar lines and a chugging rhythm section to produce one of Levy & the Oaks' most memorable songs; no short order considering their catalogue is fast filling up with them!

Bobby Mahoney & the Seventh Son, "Nothing for Nothing" -- Mahoney & Co produce another rafter-shaking anthem. But this time, they add a contemplative lyrical twist: "When it all falls apart / What will be left in your heart?" It's a question we could all benefit from asking ourselves once in a while and The Seventh Son wrap theirs inside an "arms-around-the-arena" sing along.

Jarod Clemons & the Late Nights, "On the Waves" -- Newcomer Jarod Clemons adds a classic rock feel to the comp with a pummeling guitar riff that sounds like the grandson of "Them Changes" by Jimi Hendrix & the Band of Gypsies. Move past the famous last name; Jarod is both his own man and his own musician. And "On the Waves" proves it right out of the gate. If he keeps this up, Little Big Man will have a big, big future.

The Foes of Fern, "Out of Out Heads Vol. 2" -- The Foes' first new music since the split of The Burns, and it's evident they haven't taken this newfound autonomy lying down. While the lyrics touch on Matt Fernicola's well-worn themes of aging, nostalgia, and relationships, the music is positively uplifting, creating a beautiful contrast of sound and feeling. Pay attention to the 2:49 mark. The song flips, adding a mantra: "There was no reason to leave." Just as Fern's voice gets desperate, powerhouse backing singer Jessie McCormick steps in to take us home…wow!

Malibu, "Never Ending May" -- Malibu sings of their "best heartbreak" over a post-punk beat and pleading lyrics. But it's the small things buried just beneath the surface that make "Never Ending May" worth spinning over again. Small orchestral flourishes in the intro and bridge and the ticking clock as the song ends feel like the band added just a dash of Hans Zimmer to their rock and roll.

Airacuda, "Pals" -- I love this comp for lots of reasons, not least of which being Airacuda gets back together for a new song. Ten years from now, we're going to end up with the most stealthily-released Airacuda full-length. "Pals" adds another highlight to the band's slowly-expanding songbook, this time including a midtempo groove and a sentimental ode to that which brought this band together in the first place -- friendship.

Leah Voysey, "Phoenix" -- If Voysey's last single, "Keep it To Yourself," chronicles a stressed and distressed breakup, the follow up is straight-up redemption. 2017's "Poison" might be Voysey's most popular song. But "Phoenix" is her best.

Keith Egan, "What's Wrong" -- Keith Egan is all about that slow swagger. Keyboards on delay, slow synth swells that evoke The Weeknd, and Egan's desperate vocal turn. The only thing wrong is that Egan doesn't make more than one song a year!

MaYay0, "Stay" -- With a minimalist's production, MaYay0 has offered up a flawless club jam. The single artwork tells you everything you need. Two tasseled ropes in a heart shape over a red background. This is "lights down low" music done really, really well! Oh…and it's pronounced "muh-YAY-oh."

Des & the Swagmatics, "This MoFo Right Here" -- This skittering, electric piano-driven call-out is a compilation highlight. Des Spinks's voice is among the most powerful in the entire New Jersey scene and "This MoFo" puts it (and her band's brilliant interplay) on full, glorious display!

Taylor Tote, "One Night" -- Tote's voice snakes its way around the song's question of "will they/won't they," with a dark, almost-sinister tone. And "One Night" rides a slow build that ends quicker than you can flip the light switch from on to off. Question answered?

Luke Dowler, "Get the Job Done" -- Overdriven guitar, and Hammond organ adorn this riff-propelled slice of apple-sweet Americana. Meanwhile, Dowler's voice is grittier than the dirt under your fingernails. And because of all this, "Get the Job Done" never feels like it's trying too hard. It just does what it's got do to -- well -- you know.

Marc Tappan & the Dirty Shine, "Love on Trial" -- Tappan, a scene veteran, has a beautiful story that saw him come back from homelessness earlier in his life. But "Love on Trial" is no 'just happy to be here' tune. It's an impassioned, horn-drenched lover's plea that showcases all that Tappan & Co have to offer: memorable songwriting, expert performance, and a whole lot of heart.

Natalie Farrell, "Glowing" -- This is the perfect windows-down singalong! Featuring lilting strings, a tight weave of acoustic-and-electric guitar, and of course, Farrell's mighty alto, "Glowing" is both a standout on the compilation as well as in Natalie's impressive, ever-growing catalogue.

Lowlight, "NYE" -- Capturing the sweet sadness of the holiday season, Lowlight has imbued "NYE" with the insightful sentimentality that's always sat just below the band's surface. And in singing of string lights, empty glasses, and fireworks out on the lawn, Lowlight hasn't slapped together some holiday novelty, they've built themselves a stone-classic!

Ashley McKinley, "The Truth Is" -- Countrypolitan singer Ashley McKinley's voice sits front-and-center on this lonesome piano ballad. "Believe me, I tried to keep it together / Truth is that we don't belong / The truth is, we always felt wrong." As red and raw as those conversations can be, rare is the song that captures them so well. On "The Truth Is," McKinley succeeds.

Patty C, "Hey Mama" -- Patty C serves up a beer-soaked, gospel-tinged apology to yet another flamed-out relationship. The heartbreak is strong with this one and it hurts to hit the ground so hard. But goddamn it we don't just keep coming back for more!

Abbey Road All Stars, "Come Together" -- This is what happens when the scene collaborates! Members of Levy & the Oaks, The Extensions, The Viewers Like You, Des & the Swagmatics, The Foes of Fern, Dave & Tom, and Handsome Looks all took the stage on September 28, 2019 for an Asbury Park Music Foundation benefit and a tribute to the Abbey Road album. This live take on a Beatles classic is the triumphant result!