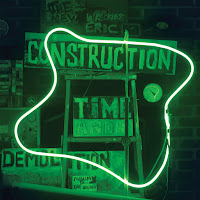 A lot of people will surely be asking Wreckless Eric that same question after hearing his amazing new release Construction Time & Demolition. The album, recorded and produced by Eric Goulden (aka Wreckless Eric) at the Southern Domestic Facility, in Catskill, New York, is a master class on how rock songs should sound.

"It's all about the sound, always the sound. Music without sound is literally nothing, so I concern myself with the sound," he's said. And within less than a minute into the first song, his talent for having guitars, horns, and backing vocals make your ears stand up and listen is remarkable.

Goulden began his recording career in 1977 when he was little more than a teenaged ex-art student with the hit "Whole Wide World." As I mentioned in my recent review of Amy Rigby's (Eric's spouse and tourmate) fine new album (The Old Guys), he was part of the 1977 Live Stiffs tour along with Nick Lowe and Elvis Costello.

The Kinks on Muswell Hillbillies and the "Did Ya" single sang, as Wreckless Eric does on "Gateway To Europe," of places like much-loved pubs and furniture stores that don't exist anymore and houses that have been torn down and people that have been relocated. There's also more than a little of the sound of that band's Preservation albums on "Gateway To Europe," and it's a great sound that Eric makes wonderful use of to reinforce the sense of the "Demolition" of the past.

The sense of time is also addressed in "The World Revolved Around Me:" "All there is is time / Hold that thought … and it's gone / The fragile here and now / Where we mark time / As time moves on." The song has a spacey vibe with strummed guitars, a lead lick that's almost out of tune and out of time, and a lonesome horn. Some of it reminds me of Big Star's Third album in which Alex Chilton deconstructed / demolished his tunes. This vibe also appears on Eric's climate change song "Flash:" "The seasons are all coming round too quick now / It seems to me the Beach Boys told a lie," and some piano-bashing ensues.

"Wow & Flutter" has crunching guitars, crashing drums, and Entwistle-like bass as it tells the story of a rival jealous for a rock star's success and his car, wife, and record sales. But it's more than that: "I've never really liked you / I thought I did / but it was just a pose / And you, you've got everything I want / I want to be you / I suppose."

After this album, everyone is going to want to sound like Wreckless Eric.

Construction Time & Demolition is out now on Southern Domestic Records.