NOT A NORMAL, AVERAGE BAND

The genre-defying, seminal rock band, The Melvins, are coming to our area this week with shows in Brooklyn (10/10), Asbury Park (10/11), and Philly (10/12). I recently caught up with Buzz Osborne aka King Buzzo, vocalist, guitarist, songwriter and founding member, for an in-depth interview. It’s hard to believe it, but The Melvins have been making music for over thirty years and have over thirty albums of material to show for it!

I was pretty psyched to have a conversation with the King to dive into the EMU or Expanded Melvins Universe. We got to talking about Buzz’s many passions including photography, rescue dogs, fan interaction, curating a setlist, and "doing his job" with The Melvins.

Oh, and I also asked him about his hair.

UnCool Uncle Matty: So let's start out by addressing some hard hitting subject matter… your hair: Does it take a lot of work to look like you just rolled out of bed or do you just get up and go?

King Buzzo: I just roll out of bed. That's it. Do you think I would spend time trying to look like this? Are you out of your mind?

UUM: Did you know that your hair has its own fanpage on Facebook? The description is simply "smells good."

Buzz: How would they know it smells good? I have not checked. I'm not on Facebook. I just joined the social media world for the first time recently. I just got on Instagram.

UUM: What finally led to you jumping into the cesspool… I mean, world of social media?

Buzz: I am an amateur photographer so I'm showing my photography with it. Prior to the advent of digital photography, I really didn't have the money to buy film and develop pictures; but, as digital photography really exploded, it gave me the ability to get more into photography. I use a lower-level camera mostly. I have tried out a variety of digital cameras but the iPhone has an amazing camera. With the right circumstances you can get an insanely good picture with your phone.

People always ask me, "How did you get that pic?" and my answer is always, "I used a camera."

UUM: You've been active on Instagram, replying to fans no matter how ridiculous the comments get…

Buzz: If people are trying to get a rise out of me, I will usually just delete their comments. It's my page. You don't get to just come on it and call me a jerk. If I get a question that's completely absurd, then I will answer with a completely absurd answer. I have only been on there since April; and, by and large, I usually get positive responses. Anyone who has any interest in our music or is a fan of our band, I completely appreciate the positivity. But anyone who wants to throw down the gauntlet and get weird with me should know what to expect back.


UUM: If social media existed when you were growing up, do you think there would be any musicians you would try to interact with?

Buzz: I probably wouldn't. Maybe I'd make a comment if I thought something was really great, but I just think it's weird that people are willing to just give unsolicited critiques of other people's work. "You should do that this or you should do that!"

Hey, maybe I should just do what I think I should do. Let me be the driver. This is especially true for record reviews. I read them and am like, "Sorry, that's not what we were doing." There's never been a time when I was like, "Wow, that person is 100% right. I didn't realize what I was doing."

As far as your question though… as a kid, I was a huge fan of The Who and of Led Zeppelin, but I could never imagine trying to get them to respond to me. I'd be almost afraid to. If I got to talk to Pete Townshend, I wouldn't ask for his autograph. I would want him to smash my guitar. That would be the coolest.

UUM: I have volunteered at an animal shelter for many years and currently have four rescue dogs of my own, so it caught my eye that some of your favorite photography subjects are your dogs. They are rescue dogs, correct?

Buzz: A few years after my wife and I got married, we moved into a little apartment in 1996; and the first dog we ever got was a rescue dog, a pitbull-lab mix. He was only like eight months old. He had been abandoned and up to that point had never been inside a house, never ate from a bowl or had any kind of bed. And his life turned around really quickly. I mean, you should have seen his eyes pop the first time we fed him a piece of steak. He lived until he was 17 years old. He was unbelievable. We loved him every minute of those 17 years. When you rescue or get a dog, you see it through to the end. That’s a commitment.

Along the way, we took in a Jack Russell terrier. She lived to be 21! We then rescued an American bulldog. He had been severely abused and then we adopted an English show dog, whose owner had passed away. She lived into her teen years also. We do not give up on our dogs. My wife is a miracle-worker when it comes to keeping our dogs alive.

We have had a lot of dogs. Yes, many of them have been rescue dogs. One of our current dogs, though, was a gift from the guitar player from Tool. I would say that's the greatest gift I will ever get from anyone.  So, now, we have Gigi and Buster. My wife swears that dogs are spiritual giants, and I wouldn't disagree with that. I can't imagine living without them.

I love taking pics of them. I take thousands of pics of them; and, if there's a really good angle, then I'll post it on my Instagram page.


Who needs cable tv when I have two Jack Russell terriers to keep me entertained?

UUM: Speaking of entertainment, The Melvins are currently on tour in support of 2018's Pinkus Abortion Technician. In regards to that particular album, was it hard for you to narrow it down to one Lennon-McCartney song to cover?

Buzz: We are actually touring in support of all of our albums. But no, it was not difficult to narrow it down. In fact, it was very easy because what we were doing was a take-off on the Moving Sidewalks' version of "I Want to Hold Your Hand." I thought they did a fucking amazing version, and I wanted to do it. 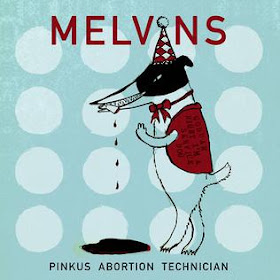 UUM: The Melvins have had a prolific career, and it seems that every year is the anniversary of another Melvins album. This year being the 30th anniversary of Ozma, the 20th anniversary of both Bootlicker and The Maggot, and we are coming up on the 10th anniversary of The Bride Screamed Murder. Are there any songs that stand out that you have fallen in love with again after all these years, or is there a song or two that you listen to now and wonder what the hell you were thinking at that time?

Buzz: With my records, I can enjoy them about up until the time they come out; and then I just move on. By the time the album gets released, I have been living with these songs for a long time. Sometimes I have been living with these songs for years before that. People assume the songs are new songs; and, sure, they are new to you. But, in some cases, I might have been sitting on a song for twenty years before I figure out what to do with it. Once I walk away from it, these records go out into the world to have lives of their own. Sure, each song, each record, has their own story behind them; but they are all a part of a giant body of work. So they are all part of same thing. There's nothing that I look back on and would say, "I hate that;" and there hasn't been something that I was like, "Oh my God! I didn't realize how good this was."

UUM: You mentioned that you are touring in support of all your records. With such an impressive catalogue to choose from, what does the process look like for selecting a Melvins set list in 2019?

Buzz: When we put together a setlist, we are trying to put together a good set and make sure it all flows together. This tour we are playing sets that are about an hour, and that whole hour is important to us. How it flows is important. I do not view live performances as a jukebox. This is performance art. There is a reason why we play these songs where we place them. Some people have a problem with that. But we are not a normal, average band. I have no interest in being that.

UUM: The Melvins have been credited as the "Fathers of Grunge." Is the legacy of the Melvins something that is important to you? Or are you more about living in the moment?

Buzz: We are definitely not the ones that sit back and say look at what we have done. We are all about what have we done lately. I would put us up against any band out there now, young or old. We are very excited about what we do and feel like we are as good as anyone. On any given night, you never know what could happen. That's the juice of playing live shows. That's the cool thing. No one can accurately translate the human experience of a live show, not on an album or watching on the internet. Seeing a painting in person is much different than seeing it in a book. That goes both ways. There's something about the live experience, something about standing there and staring at people in the front row that I do not get in a recording studio. I do not get that online. I want to do my job. I want to step on stage and hopefully give them something that they do not get in their normal lives. That's all I can hope for.

Buzz: When I became a fan of Redd Kross in 1983, if you had told me that we would be touring with them at this point and having members of their band play in our band, I would not have believed you. It's been a very strange trip. I have the utmost respect for them, and it's both an honor and privilege to have them on tour with us. I do not take these experiences for granted. My songwriting and my abilities to play have been brought to another level as a result of my interactions with musicians of this high caliber.


UUM: The Melvins have claimed they are not a political band so this question does not have to be related to politics…. What are your thoughts on today and your hopes for tomorrow?

Buzz: If you believe things are going to be different, then you are making a massive mistake. I think that Thomas Sowell is one of the greatest philosophers, and he says one of the biggest mistakes that you can make is believing that what you are thinking is new. Go back in history and look at all the mistakes that people made just doing the things that you think are new ideas and learn from that.

The album, Pinkus Abortion Technician, is out now on Ipecac Records.

For more info go to www.themelvins.net.