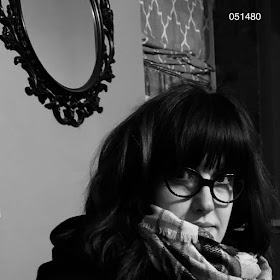 Our good friend Tom Barrett (Overlake, Tom Barrett and The Cuts, WAVE) released 051480 this week. It's a quiet and intimate portrait of life during lockdown that Tom originally intended as a private birthday present to his wife, Stacy. I was honored and humbled, therefore, when Tom reached out to me with his intention to make this very private, very personal project public.

The album is the result of a creative outburst that came following Tom's own experience of being laid low during the early days (in our part of the world, anyway) of the pandemic. "Like, making it was painful," Tom says of the album, "but it helps heal me to listen. I want it to have that effect on EVERYONE." With the ideas of sharing and healing in mind, Tom decided to release 051480 to the world and to donate all proceeds from the sale of the album to the New Jersey Pandemic Relief Fund.

I had a socially distant "conversation" with Tom over email yesterday. Check that out below to get some more detail on the making of 051480 and the events leading up to its creation. 051480 is available over at Tom Barrett's Bandcamp page with all proceeds from sales, remember, going to the New Jersey Pandemic Relief Fund.

I'd like to start off with a little background / history. Can you talk about where you were musically -- or otherwise -- early this year, say January / February / early March?

I had a pretty busy and fun beginning of the year. I had my new band going (WAVE) with Jamie Zillitto and Matt Siegle, both formerly of The Everymen. Both solid dudes who were willing enough to follow a poseur like myself out onto the shoegaze battlefield. I took part in this really fun David Berman tribute up at LoFi in the heights in Jersey City with a bunch off cool new friends I haven't seen since. I was working on some songs, playing some shows, generally in a good head space during this time. Stacy and I went down to Riviera Maya in Mexico for the Wilco festival, where we got real up close with most of those dudes, and they played three nights along with a bunch of other bands: Yo La Tengo, Sharon Van Etten, Courtney Barnett, Kamasi Washington, etc. We swam and drank tons of tequila, haha. Things were looking up. We had joy, we had fun, we had our season in the sun. (sigh)

Then came mid-March and we all started on this current situation. What was that like for you?

What does a dog say? "Ruff." I can't remember much, except that if I was in bed for weeks then I was asleep for at least two of em. I didn't feel great. I hardly ate. Had some freak-outs because I couldn't really breathe, I was weak and shaking all over, and sorta forgot how to play guitar a little bit. I can't really fingerpick anymore. Or use a pen. Violins.

Stacy tried to cheer me up by making me watch ALL the Avengers movies and their spinoffs / standalones, some of which I enjoyed but mostly are just sort of insanely difficult to follow for me, especially when you're dealing with all this nonsense. And an idiot. I was having these insane fever dreams with all the Avengers in them and they would NEVER END. But, anyway, that's what it was like. Everlasting, haha. I sadly can't speak for Stacy. She was too busy saving me while my useless tuchus was binging on old episodes of Top Chef and Parks and Rec and shit.

You had a burst of inspiration / creativity that produced this album. When did that start? Are all of these songs brand new, written in just the last several weeks?

With the exception of "(other) birds," which I'd come up with back in 2014 while walking dogs by Exchange Place, I'd say it started either Wednesday or Thursday of last week and finished on Tuesday. My friend Neil and I were going back and forth on FB. He was sending me some words he wrote for a song making fun of all these dudes playing songs on acoustic guitars. It's called "Dudes Playing Songs on Acoustic Guitars." And I just sent some back. Then more. Then a couple more. I don't know if it's finished, but it started the flow, the avalanche. Changed everything. I was writing down one, two maybe three songs a day. I say "writing down" because I really feel like I just plucked them off the song tree on a nice day and placed em in my little wicker basket right next to the lotion (which was really a pail if you go back n watch). I really don't feel so much like they're mine, I just went out and got the mail on the right day, man.

Lots of people -- myself included -- have found it difficult to be creative or productive during this time. On "PINK MOON II," for example, you seem to be offering some reassurance that that's OK. What other advice do you have for people who find themselves with all of this free time but very little motivation to do anything with it?

I think my turning point came when I saw my friend Renee from Elk City post something on Facebook about how you're under no obligation to art or to be creative just because we're living thru this pivotal moment in our history. There's enough pressure in just getting thru it all. And healthy. Since then, I've seen tons of other articles reflecting that same opinion exactly, which is an important opinion to have floating out there in the ether for others to pick up on. During any time. The only true obligation you have is to be the best version of yourself for yourself, so you can also be that for your other. But first, you gotta BE yourself before you can be the BEST version of that. Gotta complete that word. "That's my philosophy, Marty." NAME THE MOVIE! (This Is Spinal Tap)

The album is intimate in the true sense of the word. I imagined myself sitting at home with you as you played these songs. I think touches like the short interludes and the ribbing on "...kitties..." add to that. It all hits in a way that I think is different now that so many of us are sitting in our homes all day rather than being out and about with all our friends. How did you go about recording these songs? What did that look like?

That's what it is. It's me playing for you with my mask on. Best mask in the world. The mask of not being there. Um, where do I start? Yeah, I just recorded everything as memos. The actual "songs" I tried to make good and did a few takes of. Some several. "(other) birds" was hard. "me out" was hard. I straight up fudge a chord at the end, but I just loved the feel of it, so it stayed in. That short whistling track was completely spontaneous. A moment of pause with the sound off that I just sorta had enough prescience to capture in that moment right then and there. Glad I did. My favorite track on the record. "song for Sean" was half-written, half-improv, all fear. Never been more terrified recording something before in my life. You can hear me wringing the neck of the guitar because I'm so scared. You can hear it on just about every track, some sort of fear, some sort of discomfort. I wanted it all in there, Jim. That Schitt's Creek moment which was a total gift, some Real Housewives noise at the end of "PINK MOON II," boilers, plumbing, cats... everything.

There are songs here about gratitude, sadness, love, guilt, and ultimately hope for the future. This may sound too mechanical, but can you talk a little bit about the structure and sequencing of the album? Did the songs flow from you in the order that they appear here?

It's all just feel. And a river. I really just tried to let everything flow as completely freely as I could, and the pieces just came together. Petty was right. I DID get lucky. And I'm about to contradict myself a little here, because I'm gonna go ahead and say I did not write the album in order, as opposed to "write down." I really just lucked out and somehow amassed this batch of songs and moments that just sorta all fell into their right places on their own. They Tetrissed themselves... tetrised.. tet..... EVERYTHING WORKED OUT.

What was your original intention for this album? Has that changed? If so, what was the cause for that?

Serious time. It was supposed to be just for Stacy and no one else. Like the Wu-Tang record they only made one copy of and sold to that Trump-in-Training, piece of human garbage Martin Shkreli for 2 million bucks or something. I wanted it to be that, but GOOD. In spirit, in quality (from what I've heard), in EVERY WAY. I was gonna give it to her on her birthday. 051480. I didn't always have the songs, but I had the concept and the title. I wouldn't even play them live. Maybe one here or there. This was my pre-pandemic plan, except I wasn't inspired enough by the idea to really get cracking on it. It normally takes me years to actually FINISH songs. Then this little interruption happened. I got sick, I got better, the songs just came. I had this crazy surge coursing throughout my entire body throughout the entire process that only had one meaning to me. This was worth it to me. Like, making it was painful but it helps heal me to listen. I want it to have that effect on EVERYONE. So I instead decided to make it for EVERYONE and donate all the dollars and cents to charities, like the NJ Pandemic Relief Fund. Stacy was really touched by the original idea and was a little sad that it was no longer hers, and I get that. I'd be sad and maybe hurt if she did that to me, too. But she's warm and compassionate just like me. She gets it. Something else will happen. She'll have her day. Like I said, she really carries me. I'll do something.

Can't speak for the world, really. I only know I'm different after all this, and when I imagine the highly improbable scenario of going right from this to WORLD'S OPEN, GO PLAY LOUD SHOWS WITH DISTORTED GUITARS AND CRASHING DRUMS with no sort of gradual reintroduction procedures or anything whatsoever, just a complete, no-holds-barred return to normalcy... It fucking terrifies me. I feel like it could kill me, like taking an infant to front row seats to see the Flaming Lips with NO PROTECTION WHATSOEVER. I don't know if I'll be able to really do that again, honestly. I don't know if it's such a bad thing for me, tho. I'm sad for everyone else. I hope they can go to shows again. I really do, man. I feel the pain of everyone, then I feel nothin. God. Fuck off.

Thank you, Jim, for everything.