Happy Anniversary To Us

This past weekend, we officially announced our 5th anniversary party. It takes place on March 25th, 2017, at The Overlook in Asbury Park's Convention Hall. Playing for us are Shellshag, dollys, Smalltalk, and The RockNRoll Hi-Fives; and the whole celebration is a joint production between CoolDad Music and The Asbury Lanes Family. I haven't been this excited about something in a long time, and I think it's going to be a lot of fun.


On March 4th, 2012, I headed over to The Stone Pony with three other cooldads. We saw Titus Andronicus, Screaming Females, and Diarrhea Planet on that Sunday night. The next morning, I got up and wrote my first-ever post for this site. The first four words ever written on CoolDadMusic.com were "I love Asbury Park."

At the time, I was writing as someone who had grown up in the area and pretty much knew Asbury Park for its beach and its boardwalk. I'd definitely seen my share of shows at The Stone Pony or The Fast Lane over the years; but, until 2012, I hadn't really immersed myself in the Asbury Park music scene. I had, after all, spent a good chunk of my "prime show-going years" living in places like New York City, Hoboken, and Seattle. Now -- after five years of some pretty heavy immersion -- I can say that those first words I wrote at CoolDad Music are as true today as they were back then.

That's why I'm so happy to be able to throw this party in Asbury Park with the people who made Asbury Lanes one of my personal sanctuaries. Jenn Hampton and the staff at that venue welcomed me with open arms for around four years; and they made me -- a newcomer -- feel like a member of the family. It's not an exaggeration to say that there is no CoolDad Music without Asbury Lanes, and I hope that we're able to transfer some of the vibe that existed inside those four walls to our show on March 25th. I'm confident we can do it as the feeling there was never as much about the building as it was about the people inside. 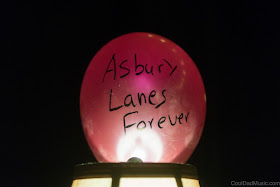 Each of the bands playing the show (like countless others in our fertile Tri-State Area) continue to inspire me here at the site. If you do a search here (or over at Speak Into My Good Eye where I wrote for a time), you'll see their names pop up often. dollys so expertly craft classic pop music that it's almost easy to miss the meticulous attention to detail that goes into every one of their songs. They're also as dedicated to a DIY ethic as they are to making great music. From Smalltalk's earliest efforts, I've been a fan of their romantic and jangly "Modern Rock at the Jersey Shore." Their sound takes me back to a time when I was just discovering that there was music beyond the Classic Rock I listened to into my teens. The RockNRoll Hi-Fives have become great friends of mine, and it's appropriate that it happened through music. Dad Joe, Mom Gloree, and Kids Eilee and Evren play exuberant rock that shows how music can connect people; and they inspire me to be a better dad. Finally, Shellshag should be an example to us all. For over twenty years, the duo of John "Shellhead" Driver and Jennifer Shagawat have done what they've wanted to do exactly how they've wanted to do it; and that's kind of what we're all about here. 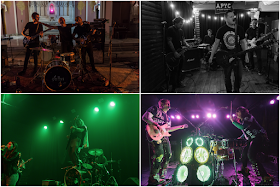 You can get tickets in advance at this link right here.