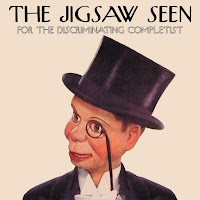 How cool are The Jigsaw Seen? Here are a few examples:

The Jigsaw Seen's "My Name Is Tom" was included on the Children Of Nuggets: Original Artyfacts From The Second Psychedelic Era box set.

The Jigsaw Seen's music has been heard in the television series Futurama, Shameless, and Wilfred.

And this one really gets me: Jonathan Lea and Tom Currier of The Jigsaw Seen performed with Ray and Dave Davies of The Kinks at their historic reunion in London on Dec. 18, 2015.

The Jigsaw Seen are known for their blend of art rock, psychedelics, garage, and Americana and The Discriminating Completist collection is made up of tracks that were originally released by a variety of labels and were previously unavailable on any of the band's albums.  An earlier version of The Discriminating Completist came out in 2013 on iTunes (it’s the one on Spotify), but this new release has more songs and every track has been remastered.

Whether by design or default (It doesn’t matter; it works), The Discriminating Completist reflects the band’s work in psych-pop and shows their love of classic bands and classic sounds. To coin a phrase, this set is a psych-delight.

In many ways, on this album, The Jigsaw Seen become the American version of The Dukes of Stratosphear, the mid-80s group that was created by XTC to write and perform the psychedelic songs they had grown up with.

Two Jigsaw Seen originals on the album make it sound as if they've spent some time also listening to the non-Dukes XTC. "When You're Pretty" and "Whore Kiss," with their Andy Partridge-like vocals and melodies, could have been on any XTC album from Mummer through to Wasp Star. It's wonderful to hear music that's so similar -- but entirely The Jigsaw Seen's own -- to that made by one of my favorite bands.

On one of the covers, "Luci Baines" by Arthur Lee and his pre-Love band The American Four, the Jigsaws take a soulful '60s single and make it woozy and spacey. Their version of Henry Mancini's extremely cute "Baby Elephant Walk" from the movie "Hatari!" becomes a rockin' drum-heavy run that reminds me of The HooDoo Guru's similarly drum-heavy take (obviously) on "Little Drummer Boy."

My favorite track on the album is their version of The Bee Gees' "Melody Fair." The original was string-laden, harmony-rich, and slightly psychedelic. But The Jigsaw Seen have turned it into a Revolver-era mashup with "She Said, She Said" guitars and a McCartney bass line from "Rain." It's terrific and wouldn't have been out of place on Cotton Mather's Kontiki. It's that good.

The Jigsaw Seen For The Discriminating Completist (Rarities And Singles 1989-2015) is out now on Burger Records. The Jigsaw Seen return to Asbury Park for a show on March 23rd at The Saint.